Attention Shut Up and Cook readers: your blog has been temporarily commandeered by the inter-web masterminds at “Shut Up and Ferment.”

A friend in the neighborhood has a very prolific apple tree in his yard. It’s not the largest apple tree you’ll find, but the sheer volume of apples it produces causes the branches to sag nearly to the ground. Unfortunately for apple pie lovers, these apples are not of the sweet variety.

Growing up in Vermont, I learned a thing or two about apple varieties and their uses. These apples seemed just right for cider pressing.  I asked my friend if I could take some and he obliged. When a prolific tree such as this is allowed to drop all of it’s fruit the ensuing mess and bee frenzy can be quite unpleasant. The fact that I removed a full 30G trashcan’s worth (as well as four 5G buckets) was appreciated. 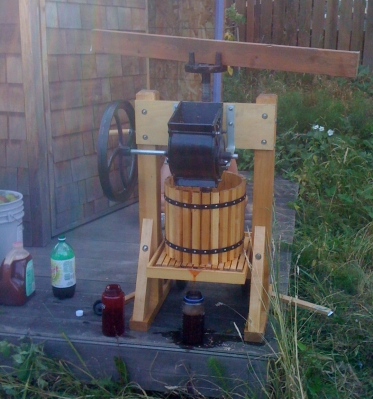 Here's the cider press from the community orchard.

Prior to picking the apples I had placed a call to Dan Eder, a neighbor who lives near a small community orchard in south Seattle.

The reason for this call was that I had heard there was a small cider press locked away in a storage shed at the orchard. Dan was great and unlocked the press for me and a few hours later we were cranking away!

Here are the basic steps I followed to create a tasty, dry, sparkling hard cider!

Before pressing, the apples were ground by hand through an attachment to the cider press. It wasn’t particularly hard to turn at first, but after the first few bucket the arms were getting pretty sore. After grinding about one 5G bucket full of apples I set the press and began turning. The cider began to flow! I quickly realized that I didn’t have nearly enough jugs to capture the cider I was pressing and called in some neighbors to take home the excess. A small group gathered with a number of neighborhood kids taking their turns on the wheel and I left the car stereo running for some tunes!

Rocking out with the cider press!

Once home I set aside a few gallons for immediate consumption and put the rest in a large pot to simmer on the stove. This simemring kills the vast majority of the native bacteria (and bugs) that may have been in the cider at this point. After simmering for about an hour, the cider was allowed to cool back down to room temperature over night.  You can’t add yeast to hot cider or you will kill the yeast. In the morning the cider was strained through some chese cloth and yeast was added. For this cider I used a “Cote de Blanc” wine yeast. There are some cider specific yeast strains out there, but a good dry wine yeast works just as well. 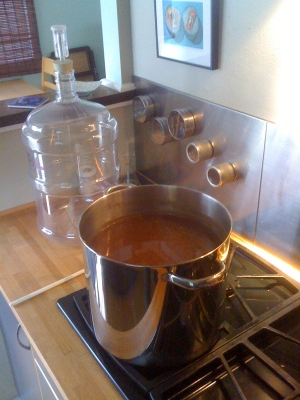 The cider begins to simmer.

The cider was then poured into a large 5G carboy for fermentation and capped with an airlock to allow the carbon dioxide to get out and keep anything else from getting in. Within a few hours the cider began bubbling rapidly and the airlock was burping away like crazy. Success! 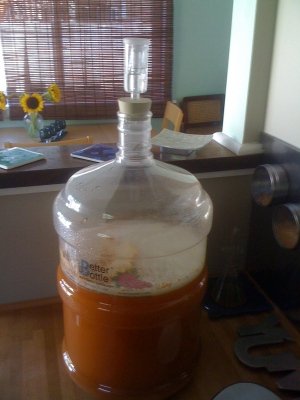 In the carboy fermenting.

After about a week and a half the airlock stopped bubbling, signaling the end of the primary fermentation phase. At this point the cider was drinkable, but “still,” as in having no bubbles. For quality assurace purposes I had a coouple glasses before bottling to ensure, ah… something. I prefer sparkling cider, so another step was required before bottling. In order to have bubbles, all you need to do is mix up a solution of honey and water (3/4 cups honey, 1 cup water) , then add an ounce or so to each bottle before you put in the cider. The yeast re-activate in the sealed bottle and eat the sugar from the honey… an voila! The finished cider has a slightly higher alcohol content and is naturally carbonated.

For bottling a simple siphon and valve was used to move the cider from the carboy to the bottles. Each bottle was then corked and stowed back in the box for a couple weeks to allow the yeast to work it’s magic.

In the end, this pressing resulted in one gallon of still hard hider, twleve 750ml bottles of sparkiling hard cider, and about five gallons of fresh, crisp cider! Cheers! 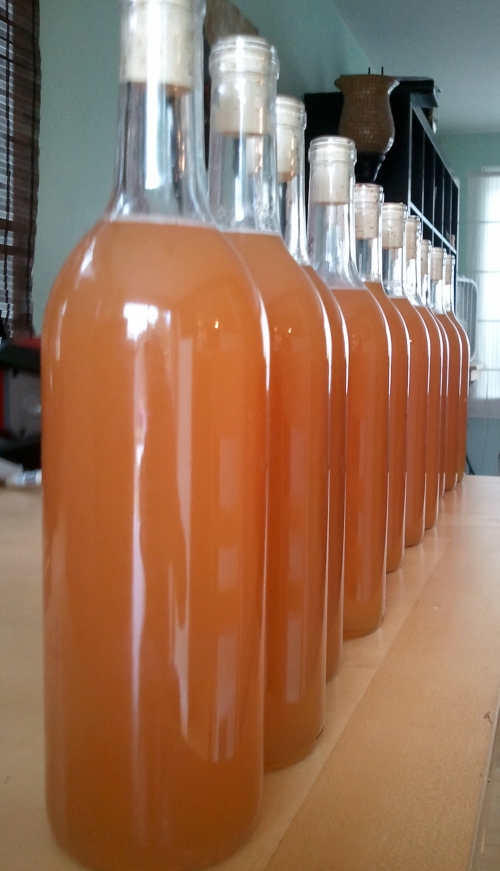 Too Busy To Shut The Blinds

Those who know me, know that I am nothing if not planful. (which yes, I know, is one of those fake, obnoxious, corporate words, but I like it.)

Whenever I feel an absence of a plan, or am asked to weigh different options to form said plan, I quickly run through each scenario and do a cost/benefit analysis to determine my final decision. [am I sounding like fun, or what?]

The other day I came home from work to find that my husband had painted the window trim in our bedroom. This was one of those stupid chores that had caused more than its fair share of fights, so it was a noted completion. Due to the recent spit and polish, the blinds had been left off, and I was reminded by just how pretty it is with all the afternoon light pouring in. [The blinds were never up the 3 years before, not really consciously, but because we’d hung them up and then never bothered to do anything differently].

Unable to sit and simply enjoy how pretty it was I immediately began rehanging the blinds. While doing so I started contemplating whether or not each morning I should plan to add a minute to my a.m. routine and put the blinds up and down. I kid you not, I evaluated this for a good three or four minutes. “It’s worth it to just make this part of your morning routine, because think how nice it will be to get the sun returning from work.” “This isn’t even a habit worth starting, because you’re going to be too busy to do it successfully and you’re just going to slide right back into bad habits (e.g. blind non-opening). “Yes you will. “No I wont”. “Yes you will. “No I wont”. “I’m just too busy to shut the blinds!” When I actually realized I was feeling a twinge of anxiety about this debate and impending required decision I  burst out laughing with self-awareness (the kind one can only truly be capable of achieving if they’ve been junior league members of a decade of family therapy following parental divorce).

How truly ridiculous…feeling stressed about whether or not one can afford to open and close the blinds as they see fit. I realized too, that having come out of three weeks of house guests and endless engagements I had become “too busy” to do a lot of things….read, sleep, exercise, or cook or write in my blog.

Which is to say….here on August 27…I hereby do vow…for the next 34 days (e.g. September 30, it’s good to set realistic expectations) to not be “too busy” to make time for those things that truly matter.

Stay tuned for lots of fun recipes coming up! On the docket croquettes, velvet corn soup with crab and chili oil, and lobster risotto.

Filed under Kitchen Trials and Tribulations