Great Escape 2011: Bucatini Pasta with garlic and anchovy, tossed with radish bulbs and greens and finished with a fried egg

Picture this. Four months before you mail in a check. Soon thereafter the emails start arriving with clues such as:

A week before a packing list arrives and 24 hours before you get your destination, itinerary, and plane tickets. Such is “The Great Escape” a trip that I take each year with my amazing, wonderful, incredible, and yes, highly modest and dearest friends. Each year there is one planner and they are responsible for everything. Where you’re going, what you’re spending, what you’re doing, where you’re staying, and of course, what you’re eating.

This past weekend the lovely Meghan planned our trip and off we went to Blue Ridge, Georgia for a weekend of cute accents, Southern charm, and yes, the occasional confederate flag. It was a weekend of cuddling, boozing, bonding, laughing, hot-tubbing, and of course mandatory goal setting (we didn’t get the reputation for being the nerdy kids in high school for nothing.) 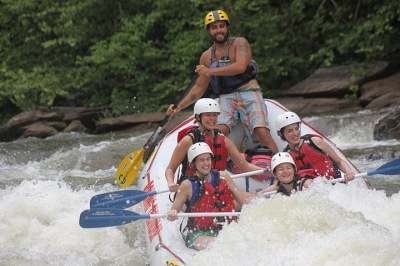 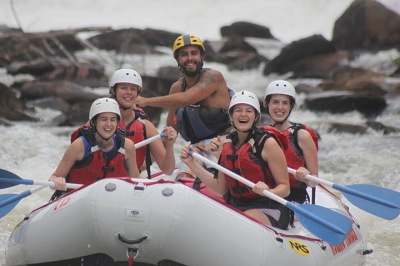 Weekend highlights included white water rafting, a charades championship where Madeline successfully acted out Tupperware, Rachel’s declaration that we should wake up “organically” (read 11a), and lots and lots of food.  This pasta dish wasn’t actually made on the trip, but I think I talked about it enough that the girl’s probably feel as though they had it. Don’t be worried about the interesting collection of ingredients and flavors.  This recipe came about from me combining two of my favorites and I promise you…it’s more than delicious.

Make this for an oh-so-good weeknight dinner when your summer CSA box or garden is going wild. And begin the countdown for next year’s Great Escape.

Bucatini Pasta with Garlic, Anchovy, and Olive Oil tossed with Radish Bulbs and Greens sautéed with Green Garlic and Chives and finished with a Fried Egg 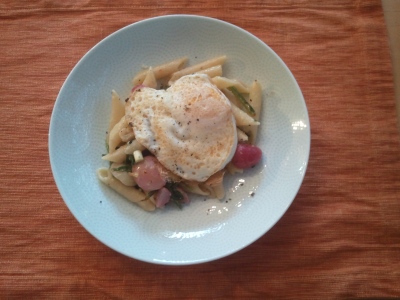 Cook the pasta in plenty of boiling salted water until just al dente. Reserve 1 cup of pasta cooking water before draining the pasta.

Meanwhile, over medium-low heat, heat the oil in a large saute pan. Add the garlic and anchovy paste and cook, stirring, until the garlic begins to brown. Add the pepper flakes if using. Add in the pasta, reserved water, and cheese and toss well to combine, cooking another minute or so.

While you’re making the pasta, in a separate pan put together the radish portion of the dish.

Clean radishes and coarsely chop the greens. Trim and quarter the bulbs.  Heat the butter in a skillet, over med. Heat.  Add radishes and cook, stirring often for 2 min.

Stir in greens mix, radish tops, chives and garlic  until wilted.  Salt and pepper to taste.

Toss the pasta base with the radish dish and combine well. Quickly fry up an egg and serve. So good!

Admittedly the past month has been extra busy, complete with a jam-packed extracurricular calendar and bi-coastal family bonanza that I could only keep thinking about while humming that “Partridge and a Pear Tree” song. You know the one I mean. 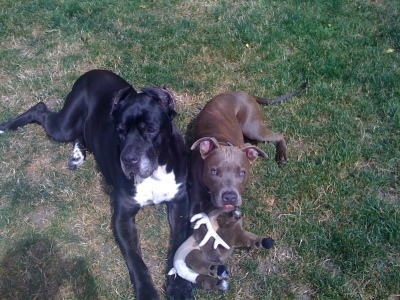 So with a weekend stretching in front of me…and a life maintenance list waiting to be checked, I did the very first thing that came to mind; that I wanted to do: I Shut Up and Cooked.

This frittata is very yummy and is a great way to use up what’s in your fridge. It’s quite forgiving, so don’t be afraid to experiment or tweak it slightly to suit your taste. 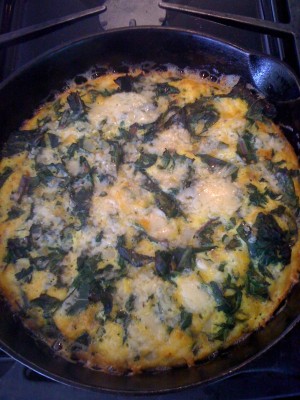 Fresh out of the oven

1 bunch of kale, rinsed and coarsely chopped (avoiding thick part of the stems)

You’ve probably noticed that things have been a little quiet at Shut Up & Cook this past month. But I have a good excuse…I’ve had royalty in town. And I’m not talking Will and Kate.

No…I’m talking about His Royal Highness…the Duke of Tacoma. Or just Duke for short. 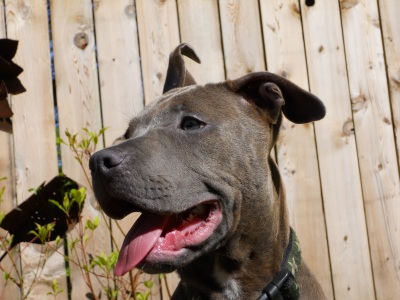 His Royal Highness...the Duke of Tacoma 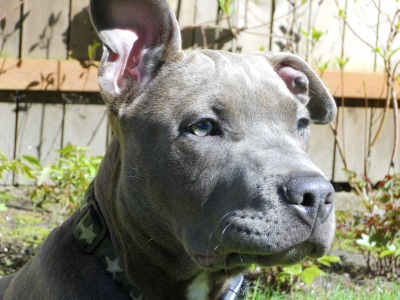 Last September, we had to put our best friend Lucky the Dog down. He left a hole in our lives that Matt and I did our best to ignore with over-rationalizing and good ‘ol fashioned New England denial, but the truth was our little family was missing something. So this Spring we (okay I) started to make lists. “Pros and Cons of Getting a Puppy”. The cons list is long and easy…the pros list is longer and easier. Enter Mr. Duke. He was abandoned on the streets outside Tacoma, near death with parvo and severely stunted by rickets. Turned into the Tacoma Humane Society, they got him healthier and then given his breed (the ferocious Pit bull) gave him a short sentence to euthanasia unless someone adopted him. Enter, The Pit Stop, a terrific small rescue group that was started to be a voice and a safe haven for the very misunderstood, neglected and abused American Pit Bull dog breed.

Duke was a lucky one. He was picked up by a great rescue group and then placed in an amazing foster home that understands the breed and delivered to us a 4 1/2 month old dog that was already more trained than most people’s children.

The last month has been one of such fun and discovery. Onca is a brilliant older sister and I am an undeniably overly proud (read bragging and obnoxious) Mom. Duke has proven to be a sterling representation of the breed: friendly, smart, funny, inquisitive, utterly devoted, and goofy. We do have to deal with some people picking up their little dogs to walk by us at the park due to their ignorance, but it’s a small price to pay. I wouldn’t want a chihuahua anyway.

And such is my long-winded excuse of why I haven’t been cooking. I’ve been too busy gushing about Duke to anyone who will listen. But this sunny Fourth of July weekend I decided to get back into it. First step…the ultimate summer salad: Mozzarella, Basil, Tomato with Olive Oil and Balsamic. This is so easy it hardly requires a recipe, but it’s guaranteed to impress.

Serve it when you’ve got His Royal Highness in town…just don’t let him beg. 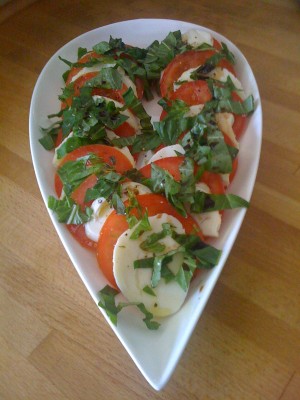 Serves 4-6 as a side dish.  Extra yummy paired with grilled crostini and Prosecco.

2 TB Good Olive Oil (the best you can afford)

Coarse Salt and Pepper to taste

“So…what do you say we reserve our Zipcar for an extra hour before we head back to my parents?”, he crooned to his date smoothly hoping to distract from his mediocre good looks and advanced receding hairline.

His date, (who was admittedly much better looking, but whose vapid expression and refusal to actually eat any of the food in front of her immediately made me skeptical), declared “Totally!”, whipped out her iPhone with the urgency of someone grabbing their EpiPen and immediately started pecking away at the ZipCar ap.

This couple, smooshed next to us at The Corson Building’s communal dining table, was the epitome of NW trust fund babies, who are too ecofriendly to own their own cars, and too liberated to own a house, but who aren’t too proud to still be living with their parents in their 30s and 40s.

Now…you’re probably thinking that I’m being overly judgemental and sarcastic (it has been known to happen ) and are curious how it is that I know so much about these people. Well…for one…The Corson Building, which has dominated the Seattle restaurant scene with rave reviews and a cult like status, is a delightfully small space with large communal tables. I actually like dining like this, except for the rare instance where you’re seated next to Gucci-wearing, pseudo hippy, faux artists who make out at the table and sort of push their food around exclaiming about its’ “depth”, “energy”, and general “fucking awesomeness”.

To be fair, I think our dining neighbors may have given the evening a more sour tone than was deserved but for as excited and ecstatic as I was to try The Corson Building I was sadly disappointed. It’s good, not great. But for the price and exclusivity there are many better restaurants in Seattle (think Anchovies and Olives or La Medusa).

I started with the smoked and marinated trout and mussels with raw beets, crème fraiche, and walnut oil. Unfortunately, all those powerful flavors spent the whole time shouting over each other, rather than complimenting, resulting in a surprisingly bland, B- appetizer at best.

On I moved to the One half of a young chicken cooked in the fireplace with artichokes, and a sauce of livers & garden sorrel. This was yummy, but was prepared and served in what I can only describe as an overly deliberate peasant fare fashion, as though to shout to the world…”This isn’t a fancy restaurant! It’s not snobby! It’s just everyman’s grub!” Everyman’s grub at $50+ per person easy.

The dessert however was delicious; Kurt Timmermeister’s triple cream with squash conserve and cookies. The combination of the sweet and savory was a delightful end to an entertaining, if not wholly satisfying dinner.

Enjoying a girl’s weekend to myself I wanted to create something similar, but with a bit more of a nod to Summer’s arrival. The result?

A traditional shortbread cookie, topped with a wedge of Saint Andre’s French cow’s milk cheese, and finished with a rhubarb compote. Serve this as the perfect end to a dinner party, with a crisp, white wine.

Now THAT is something worth returning the Zipcar late for.

Shortbread topped with a Wedge of Triple Cream, Finished with a Rhubarb Compote

Makes about 2 cups, so you’ll have lots extra but it’s delicious used on ice cream, as a marinade for chicken, or served with crackers and cheese.

1. Combine all of the ingredients in a medium saucepan and bring to a boil over moderately high heat. Reduce the heat to moderately low and simmer for 10-15 minutes or until rhubarb is very tender and resembling a rustic jam. Remove the vanilla bean and allow to cool completely. Can be made ahead of time and refrigerated for up to four days.

1.In a mixer, preferably your Kitchen Aid, combine the butter and sugars until light and fluffy. Mix in the mint and orange zest, and gently blend. Add the flour, cornstarch, and salt, and mix until well blended and forming a dough. Give the dough a knead or two to fully assemble into a ball and wrap in plastic wrap. Flatten to about 2 inches thick. Refrigerate until firm, about 30 minutes.

2.Preheat the oven to 325 degrees. Press the dough into a lightly greased 8×8 baking dish, making as flat and even as possible. Prick in a decorative pattern with a fork.

Bake for 18 to 20 minutes in the preheated oven, just until dough begins to brown at the edges. Cool for 2 minutes and then cut into squares. Once cool completely remove from pan and set on serving platter.

Assemble the cooled short breads on a plate, allowing one to two inches of room in between each. Top each with a slightly smaller piece of triple creme cheese. HINT: In order to get a really clean cut of the cheese, freeze it for 15-20 minutes and use a knife that has been run under hot water. If you follow this technique you’ll just want to allow enough time for the cheese to come to room temperature after it’s been cut and assembled; about 30 minutes. Top with dollop of the rhubarb compote. Enjoy! 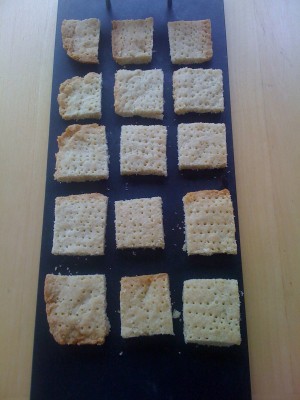 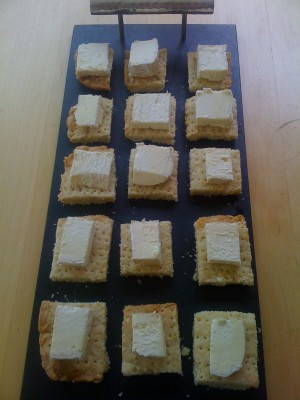