As you’ve probably guessed by now, I’m not much of a “Woo-Woo” person. I don’t listen to Phish, I haven’t owned tye-die since 1991, I don’t believe in Dream Catchers or Fortune Tellers, and I generally find activities where you’re supposed to close your eyes and hold hands with your neighbor somewhat amusing, and very uncomfortable.

This translates itself in perfect form into the kitchen as I suspiciously flip through recipes exclaiming “Delicious Sprout Smoothies” or “Dairy Free Grilled Cheese”. If I can’t see something, and taste it, and touch it, and most importantly, make sense of it, I tend to be a bit of a skeptic. Okay…a really big, annoying skeptic.

So when my CSA box arrived boasting a Cauliflower Mac & Cheese I was immediately wary, quick to dub it as some vegetarian, hippy dish that would never be as good as the real thing. However, as I peered into my refrigerator and realized that I still had anxiety-producing amounts of vegetables left and no plan with how to tackle them I decided to hand myself over to the softer side, and give this a try.

It admittedly is not the same dish as a traditional Mac & Cheese made with a béchamel, lots of cheese, and heavy cream, but it is a lovely lighter version of the old standard, with a nice contrast between the creamy cauliflower puree, dark, leafy kale, and crispy panko bread crumbs. It also is delicious, I think maybe even better, microwaved the next day…go figure!

Enjoy this when you’re willing to put your cynic subconscious on the shelf for an evening, and see what emerges.

The treats, in order of when comments were made.

The judges preparing for their case.

GIVEAWAY WINNER: Thanks to all who entered to win tickets to the Best of Seattle Party! The honorable judges, Duke and Lou chose the winner out of a row of 11 treats. The first snarfed up was #8, Morgen Schuler of Morgen Schuler Photography. Congrats to Morgan…and lucky for us, now we know this year’s event will be shot in style!

1/4 cup plain, non-fat Greek yogurt (I like Chobani for cooking b/c it’s less sweet than most) 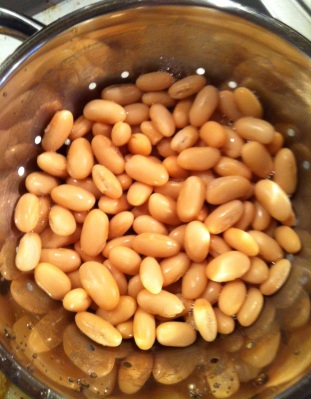 These beans give soups a wonderfully creamy consistency without the guilt.

If you live in Seattle right now you are likely cursing the rain. For it has returned. In droves. Or sheets. Or buckets. Pick your poison.

Admittedly the past two weeks have been abnormally spectacular with gorgeous day, after gorgeous day, taunting and teasing us with the idea that perhaps this year the Seattle Summer Curse of not beginning until after the 4th of July would be broken. Well friends, as I sit here typing and the rain sits outside pounding, I’d say we might have spoken too soon.

While I’m going to grumble like a good Seattle-ite, I should also confess that there’s something fun and cozy about the rain returning. It’s an excuse for a few more winter meals and big red wines. And sweatshirts. Big sweatshirts.

This soup is a piece of cake to make, very healthy, and just so damn good. Roasting the cauliflower gives it an even richer flavor, and the white beans add a creaminess you would swear was the result of gallons of half and half. It’s quick to make, healthy to eat, and when served with a crusty piece of bread and mixed greens the perfect Rainy Monday Meal.

Creamy cauliflower soup served with a touch of paprika and parsley

We all have that sweater…it’s a bit too big, definitely too wide, has holes in the sleeves, and a stain on the side, but to us it is perfect. Representing comfort and familiarity we pop it on feeling perfectly content, weekend after weekend, much to the groans and chagrin of our more fashion savvy friends.

The food equivalent is of course all the classic comfort foods. Decidedly homey and sometimes a tad homely they are synonymous with a simpler time where meatloaf and dinner at 5p were standard fare.

There are times, however, when we crave something rich and comforting without the heaviness or frumpiness of our favorite foods. This soup is just that.

Exquisitely satisfying and utterly delicious, it says, all at once, just like that favorite sweater, but with a touch more style, ‘welcome home’.

Pair with a crusty wheat bread and a sparkling wine such as Prosecco.

Heat the butter in a large saucepan set over medium heat. Add the onion and celery and cook for 5 minutes, until the onion has softened but not browned.

Transfer the mixture to a food processor or blender and process in batches until smooth. Return the puree to a clean saucepan. Add the cream and cheese and cook over low heat, stirring constantly, until the cheese has all smoothly melted into the soup.

Season to taste with salt and pepper. Ladle into warmed served bowls and top with chopped parsley.